Serendipity: It's Relevant AND Unexpected

As I've been discussing over the last months, I personally believe measuring non-accuracy aspects of intelligent systems is one of the most important challenges to make algorithmic recommendations ethical.

By definition, we can say recommendation is serendipitous if and only if it's (1) relevant to a user AND (2) unexpected for them.

First, a serendipitous item should be not yet discovered and not be expected by the user [unexpected]; secondly, the item should also be interesting, relevant and useful to the user [relevant].

Source: "Beyond Accuracy: Evaluating Recommender Systems by Coverage and Serendipity" (2010)

Hence, the practitioners need to consider what defines relevance and unexpectedness of a recommended item, on a case-by-case basis. This is a big open-ended question, and that's why the concept of serendipity is rarely discussed both in academia and industry.

It should be noted that Serendipity is not the only metric that goes "beyond accuracy". For instance, Novelty and Diversity can also be employed to measure the goodness of recommendation as you can find at a dedicated section in the Recommender Systems Handbook.

Importantly, regardless of the measurements, capturing the user's taste/desire in the form of relevance is a must. That is, it is not a good idea to naively show random irrelevant contents without taking user-centricity into account for the novelty and diversity sake.

Meanwhile, novelty and diversity are essentially different from serendipity in terms of unexpectedness i.e., how "obvious" the recommendation is. Here is the citation from the "Beyond Accuracy" paper again:

Therefore, going beyond user's expectation is a unique, foundational requirement for serendipitous recommenders, and such a candidate must be in a tiny fraction of the entire relevant contents. 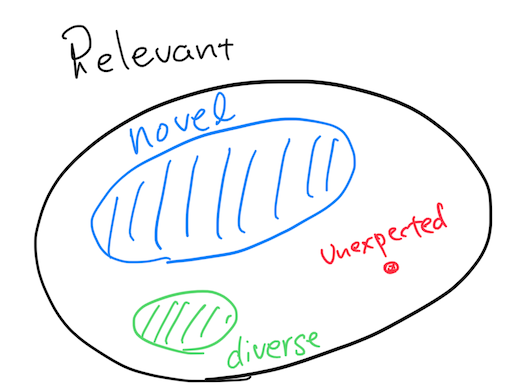 Last but not least, there are several variations of the definition of serendipity and its relationship to the other metrics. To give an example, "A Survey of Serendipity in Recommender Systems" illustrates the problem spaces as follows, which extends the discussion to e.g., irrelevant unexpected items and familiar items that aren't new to a user. 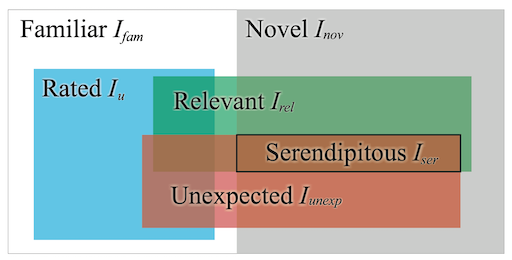