Reviewing Things I Do Not Know About the Indian Act #NDTR

September 30 is the National Day for Truth and Reconciliation (hashtag: #NDTR) in Canada, a day that we look back on the dark history of the residential school system European settlers had implemented, raise awareness of its impacts, and take an action to rebuild the relationship with Indigenous Peoples.

As a foreign national living in Canada, I see understanding the local history, especially the ones about Indigenous Peoples, is an important mission, and I've been continuing the journey through learning Canada's history and taking an online course. Here, my recent reading of 21 Things You May Not Know About the Indian Act: Helping Canadians Make Reconciliation with Indigenous Peoples a Reality was a highly insightful and great use of time for the week of Truth and Reconciliation.

The book gives readers a succinct collection of important facts and references about how terrible the past & present is, and what we can do as an individual. Importantly, the content is NOT about the history that's already over, and the impacts rather still visibly exist in various scenes.

If Canada and Canadians are going to reconcile with Indigenous Peoples, then the existing relationship—the one based on the Indian Act—has to be rebuilt. The past cannot be overlooked or dismissed as "ancient history," because it isn't; the impacts of the past are ongoing. (p. 84) 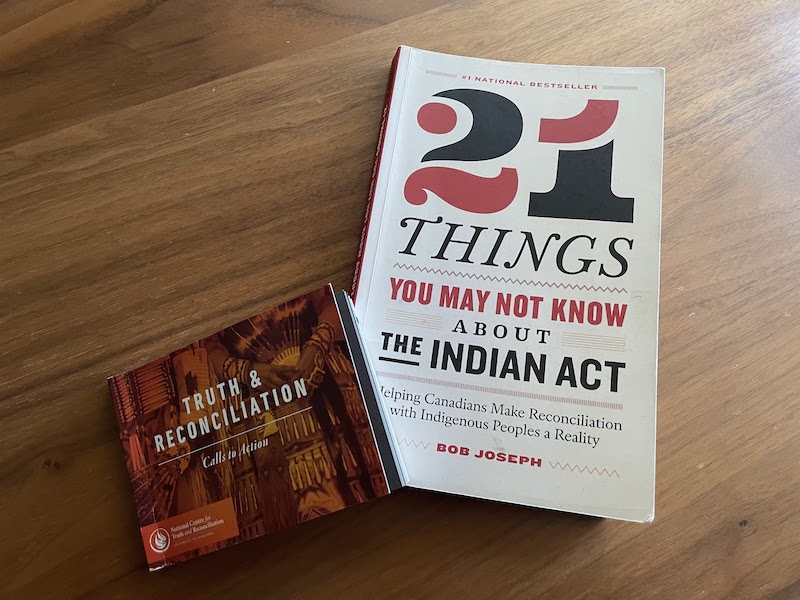 Following 10 discussion topics the author listed in Appendix, I'd like to review what I learned from the book.

1. Why do you think so little is known about the Indian Act?

I believe the reason is in education, especially for adults.

I honestly don't know much about how Canadian children are educated in regards to the Indigenous history and the Indian Act, but if I think of a similar history in my home country (e.g., Ainu, the indigenous population in the Northern part of Japan; or, any other types of regional discrimination, violence, assimilation movements), a generation-to-generation educational system plays a crucial role to accurately convey the facts about the dark history. I'm sure the schools have some curriculum about history, but it's not easy for the kids to deeply realize how serious the topic is, and hence broader and stronger messages from parents and governments are necessary.

In that sense, I still don't see sufficient resources and opportunities for adults to deepen their knowledge about the Indian Act. One of the most effective ways would be having direct interactions with Indigenous Peoples, and, even though I see some events happening at a community level, it's still hard to find and attend such opportunities regularly.

2. How does knowing more about the Indian Act affect your life?

It has changed how I see someone who has a different way of thinking/speaking based on different cultural and historical backgrounds, which is essentially everyone other than myself.

Of course, the degree of seriousness differs, but the book brought me a realization that a discriminatory legislature like the Indian Act did (does) exist anywhere in the world, such as the one I mentioned above in the context of Japanese history. In my opinion, the fundamental reason is that, whenever we encounter people who are different from ourselves in some ways, the easiest approach is to "get rid of" the difference by making an effort on assimilation. Even in our day-to-day life, consider someone who has an opposite opinion to yours—You'd naturally feel uncomfortable with facing these people, and you might simply give up having a conversation and take an easy path such as ignoring, laughing, or criticizing.

However, we'd rather need to respect the difference and spend enough time establishing a mutual understanding. It can be a "cost" in the short run, but I'd like to believe that all the efforts are eventually paid off compared to the serious consequences the naive ignorance could bring e.g. polarization. Thus, although the seriousness is not comparable for sure, I cannot stop seeing history through the lens of the different issues modern society is facing.

3. Which aspects of the Indian Act were most disturbing to you?

Prior to 1951, the Indian Act defined a "person" as "an individual other than an Indian." An Indigenous person's only avenue to being recognized as a "person" was to give up their Indian status (p. 27)

I thought I'm already aware of the darkness of the Indian Act enough, but the fact above was definitely beyond my perception and a way worse situation than I could think of. It illustrates how inhuman the Indian Act was (is), and the country completely took human rights away from the Indigenous Peoples.

4. What do you think of the language the author used in the book? Was it passionate? Dispassionate? Objective? Inflammatory? Powerful? Weak?

It's moderate—The author set a proper tone and listed important facts without surfacing strong emotions. Although the story stirs our feelings in, I think it's important for everyone to calmly see the facts and make a constructive discussion towards reconciliation. That said, I'd like the author to include a bit more alarming messages in the book, so the readers are motivated to take immediate action.

5. Which aspects of the book made you feel uncomfortable? Do you feel as though the author is laying blame in any way on the non-Indigenous population?

None of the aspects made me feel uncomfortable, and I don't have an impression that the author is laying blame on the non-Indigenous population. But, from a fairness standpoint, it'd be nicer if the author could more clearly highlight both the benefit and harm each side of European settlers and Indigenous Peoples had, in the early days of the country; there must be more complex conflicting interests between both parties, and hence I'd love to see how the federal government originally approached to the Indigenous Peoples, how they responded to the contact, and why the government ended up with implementing the Indian Act, which the University of Alberta's Indigenous Canada course covered.

6. How has this book affected your view of Canada's history and its founding father, John A. Macdonald? Does removing statuses and renaming buildings contribute to reconciliation or erase history?

Since the book shows many negative quotes from John Macdonald, I definitely have a more negative impression of him. However, I know it's not a fair assessment—Even though the history is completely unacceptable, I can easily imagine that the strong messages & attitudes were "reasonable" for Europeans at the time of confederation; the founding father must be in a challenging position, and it's indeed not easy to unite the lands while balancing interests of multiple groups. Eventually, in the conflicting environment, suppressing minorities is one of the "easiest" paths an authority can take as I mentioned before, and thinking of what happens as a consequence in 100+ years is not straightforward.

Therefore, removal of the historical footprints doesn't help, and I feel keeping them as-is is a better choice for us not to forget the dark history.

7. How does this book influence the way you now perceive Indigenous Peoples?

The book amplified my view of Indigenous Peoples as a victim of the legislature. However, as I pointed out in #5, I have a sense that the book is just one of many views of history, and hence I simply want to use the book as a stepping stone toward further learning; I strongly believe each of us needs to proactively take an action to get a real voice from Indigenous Peoples, verify whether current society's perception is accurate, and consider how the government bodies might do differently.

8. What are the social and political impacts of removing the Indian Act as a piece of legislature?

I'm sure it's going to be a big step if it actually happened. However, a natural outcome I can think of is everyone eventually forgets about the Indian Act, and the relevant messages from society & politicians will get weaker and weaker. History won't be voided forever, and hence, when the Indian Act is removed, it is equally or more important to implement a long-lasting mechanism in society so everyone has opportunities to continuously learn about history. And yes, this is where the Truth and Reconciliation Commission's 94 Calls to Action come in.

9. Which of the Truth and Reconciliation Commission's 94 Calls to Action were relevant to you personally? Professionally?

Museums and Archives (#67-70) and Newcomers to Canada (#93-94) are the most relevant to me as a foreign national who is actively studying Canada's history. I'd like to keep seeking learning resources at various local museums and library programs. Meanwhile, even though I have no plan to apply for Canadian Citizenship, for now, studying for the citizenship test might be a good idea to deepen my knowledge about the country.

Professionally, Business (#92) is the one I want to be most conscious about. In particular, since I recently became a self-employed business owner, I'd like to incorporate the perspectives I learned from the resources into day-to-day communications whenever possible.

10. Has this book broadened your understanding of the issues faced by Indigenous Peoples today?

Yes, it certainly has.

One of the biggest surprises I had after relocating to Canada is how many downsides exist in history, as well as in the current society at large. As many tourists and newcomers say, my original impression was "Canada is such a beautiful place, I love here!", but I cannot say such an irresponsible statement anymore. There are a lot of ongoing complex issues the young country needs to work on, and the situation indeed differs depending on the location (e.g., province, city, area); "Canada" is a too broad subject, and I still know little to nothing about a tiny fraction of the country.

Note that, as an Amazon Associate, I earn from qualifying purchases on amazon.ca.

Takuya Kitazawa is a freelance software developer, minimalistic traveler, ultralight hiker & runner, and craft beer enthusiast. While my area of specialty is in data & AI ethics and machine learning productization, I have worked full-stack throughout the career e.g., as a frontend/backend engineer, OSS developer, technical evangelist, solution architect, data scientist, and product manager. You can find what I am doing lately at my "now" page, and your inquiry is always welcome at [email protected], including comments on my blog posts.

Schedule a call with me